Be Honest: Are You Afraid to Evangelize?

In my experience, when Catholics are confronted with the idea of evangelizing, the first reaction is fear—plain, unadulterated fear. You know how they say people most fear public speaking and death? Well, most Catholics would rather give a speech from their grave than evangelize.

That fear usually takes one of two forms (or even a double whammy of both). First, the Catholic fears that he doesn’t know enough about his faith to evangelize. He might even fear that his ignorance is so bad he could turn people away from the Faith. The second fear is social rejection. What if my family or friends or co-workers think I’m crazy? Or offensive? I don’t want to be the religious freak with no friends.

Many Catholics have rationalized their fears in order to refrain from evangelizing: If I offend Elizabeth it’ll harm our relationship and then I won’t be able to be a good witness to her.

Or, I don’t think Will is ready to hear that yet. He’ll think I’m judging him and it’ll just turn him away from the Church if I talk about it now.

And my personal favorite: St. Francis said we only have to preach the gospel through our actions, so I don’t really need to bring up my faith with others. My actions will convert them.

This widespread fear of evangelization has consequences; most importantly, many souls have not heard the gospel proclaimed in all its beauty and fullness. While evangelicals, Mormons, and Jehovah’s Witnesses are hitting the streets, Catholics are sitting at home with their mouths shut. The departure of so many people from the Church over the past few decades isn’t unrelated to our lack of evangelization. So it’s vital that we overcome these fears and work to spread the Faith. Let’s look at the two main fears of evangelization and see if we can’t make them a little less daunting.

Okay, you’re not Scott Hahn or Bishop Barron. You can’t remember the difference between Transubstantiation and the Transfiguration. So how are you going to spread the Catholic faith? What if a Protestant starts slinging out Bible verses like the cafeteria lady on mashed potato day? Or a heterodox Catholic regales you with stories of women priests in the first century? What should you do?

First of all, such situations will rarely occur. Unless you’re going to Bob Jones University or are a faculty member at Georgetown, you won’t typically encounter these types. It’s likely that the person you’re talking to will be far more ignorant of Catholicism than you are. Just by being a practicing Catholic you have picked up more information than you realize. Don’t be afraid to use it.

What matters most in evangelization is that you are able to tell your story—how Christ impacted your life and why you love being Catholic. (You do love being Catholic, right?) This is the foundation of all good evangelization. You see it with the great evangelist St. Paul: he never tires of telling the story of how Jesus changed him from a Christian-hating Pharisee to the Apostle to the Gentiles. Your story may not be as dramatic as St. Paul’s, but it will have a great impact on those around you. If you are living as a Catholic, then you are living counter-culturally, and that will make people curious to know why. What better time to tell them the reason for your joy?

Also, there is nothing wrong with the answer, “I don’t know—I’ll get back to you on that.” That’s why God created Google. When I was first involved in Catholic evangelization in the early 1990’s, finding answers to tough questions involved hours at the library or sending away for a set of Catholic Answers tracts (raise your hand if you remember the old pastel-colored CA pamphlets). Today you can go to catholic.com or some other solid site (or book) to find the answer. So if you’re stumped, there’s no excuse to be stumped for long. Find the answer and then get back to your friend.

“I’m afraid of being rejected”

Let’s be honest: this is the real fear most people have, and it’s also the one most people will deny having. After reading stories of countless martyrs who suffered and died for the Faith, no one wants to admit he’s afraid of not being invited to the next neighborhood barbecue.

Social rejection is a real and legitimate fear. Unless you’re an antisocial freak, no one wants to be rejected by his peers—we all want to be liked. And the risk of being rejected for our Catholic beliefs increases each passing day. Recently, I was on the social network Reddit (which mostly consists of immature and aggressive atheist young men posting memes). Someone posted a story of a state legislature trying to pass a pro-life law. I posted the simple comment that I hoped they were successful. Almost immediately, I was attacked by brigands of pro-abortion advocates downvoting and vilifying me, often with profane language. All for simply saying I hoped a pro-life law passed. Honestly, it made me hesitant to speak up again. And that is the point: anti-Catholics don’t have logic behind them, so they look to impose their views by force, often by simply shouting down and verbally attacking any who oppose them.

However, Christ commanded that we evangelize, and he didn’t make exceptions for coworkers, neighbors, or Reddit attack brigades. All of the great evangelizers suffered. St. Paul’s writings are filled with references to his suffering, and he thanks God for being able to suffer for the sake of Christ. He connects his suffering directly with his evangelization efforts, writing, “Now I rejoice in my sufferings for your sake, and in my flesh I complete what is lacking in Christ’s afflictions for the sake of his body, that is, the church” (Col. 1:24).

We will likely face far less suffering than St. Paul, but if we evangelize we will face rejection. Yet we must be willing to tell others about Christ and his Church like Paul did. If we don’t tell our loved ones about Christ, who will?

I’ve often found that our fears are far worse than the reality. When I first organized a door-to-door campaign for my parish I was terrified, and I could tell just about all the other volunteers were as well. We imagined slammed doors, hurled epithets, and growling pit bulls being set loose. But none of that happened. We mostly encountered indifference, but we also met people who were genuinely happy to talk with us. After the campaign was over, all those who participated were energized to continue to evangelize: the fears of our imagination gave way to the grace of sharing our faith with others.

We’ll never completely get rid of our fears. What is needed more than anything among Catholics today, then, is courage. As the saying goes, “Courage is not the absence of fear, but the judgment that something is more important than fear.” And what is more important than the salvation of souls? As Catholics, we must pray for the virtue of courage so that we might overcome our fears and boldly spread the faith to those around us, even if we feel inadequate. Even if we feel we’ll be rejected.

Eric Sammons is the author of the new book “The Old Evangelization: How to Spread the Faith Like Jesus Did” from Catholic Answers Press. You can buy the book now at Shop.Catholic.com and listen to his recent guest appearance on Catholic Answers Live. 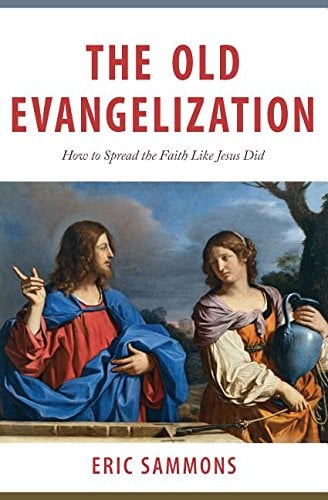