Leave it to the bizarre imagination of retail America (merchants and consumers alike) to turn the celebration of the moment when an angel of almighty God handed the palm of martyrdom to a third-century Roman priest into an opportunity to boost the bottom lines of candy manufacturers and lingerie vendors. It’s a pretty easy guess with what kind of judgment Valentinus would react.

Let’s bring the commemoration back into focus.

According to the 1962 Missal, St. Valentine was martyred under the emperor Aurelian in A.D. 270. The source for the claim, I assume, is the Roman Martyrology compiled under Pope Gregory XIII (r. 1572-1585), better known, perhaps, for the calendar that bears his name. Gregory was working from documents a millennium older, but all that we now associate with Valentine’s Day derives from Chaucer’s reference to the mating of birds on February 14, medieval texts such as the Golden Legend, or even later custom.

I love legend. It often brings into relief an understanding of the reality of human experience that can be missed in pure historical fact. So, if Valentine secretly witnessed the rite of Christian matrimony and lost his head for his efforts, then he joins other heroic witnesses from John the Baptist to Thomas More who lost their heads for defending the sanctity of marriage. In our day we very much need to invoke these saints, whether when faced with the vitriol of militant sodomites or that of baptized Catholics (family and friends) who can’t understand why we won’t attend their weddings outside the Church.

Nonetheless, although all of the facts of St. Valentine’s life are known but to God, the claim that he died under Aurelian can be doubted. Aurelian was not a persecutor of Christians. Indeed, he was a great general and a man of extraordinary political will. His reign was the beginning of the end of the Third Century Crisis, which saw some 20 to 25 emperors, nearly all of whom were assassinated. Diocletian, who reigned ten years after Aurelian (and did persecute Christians, although not at first), put the finishing touches on Aurelian’s restoration with his establishment of the Tetrarchy (rule of four), an arrangement without which Constantine never would have come to power and the Church never would have flowered. (Diocletian was one of those rare honorable politicians who, in the tradition of Cincinnatus, surrendered his power to retire to his farm.)

When you visit Rome today, the wall you see is the Aurelian Wall, a project of this great emperor’s reign and not of that of Marcus Aurelius, an emperor of more than a century before. Marcus Aurelius was, however, another great man of pagan antiquity. His reign, in spite of the stoicism for which he is famous, moved forward the relationship between Christian and pagan Rome. The Martyrs of Lyon were the exception rather than the rule during this period, and even his rotten son Commodus, of Ridley Scott’s Gladiator fame, had Christians in his household.

The martyrdom of Valentine more likely took place under Claudius II, also called Claudius the Goth, one of the few emperors of the period who died not by assassination but by natural causes (if smallpox can be assigned to that category). The traditional site of the martyrdom is outside the city walls on the Flaminian Way, the road (of Milvian Bridge fame) that runs from Rome to the once seaport town of Ravenna. The Porta del Popolo where this road enters the city walls (and near which my friends from Catholic Studies at the University of Saint Thomas have their Rome campus) was once called the Porta Valentini.

St. Valentine’s skull is displayed in the Church of Santa Maria in Cosmedin near Rome’s Forum Boarium. This beautiful paleo-Christian church is best known for the likeness of a man’s face (a Roman sewer cover, perhaps) that now graces its portico called the Boca della Verita. Wives, goes the medieval tradition, would bring their husbands there to test their fidelity by sticking their hands in the mouth of the face. Unfaithful husbands’ hands were bitten off. Now the Boca is use to test probity in general, but it is something in God’s providence that the same church that holds the skull of an early defender of marriage is also the site of a medieval tradition of testing marital fidelity. 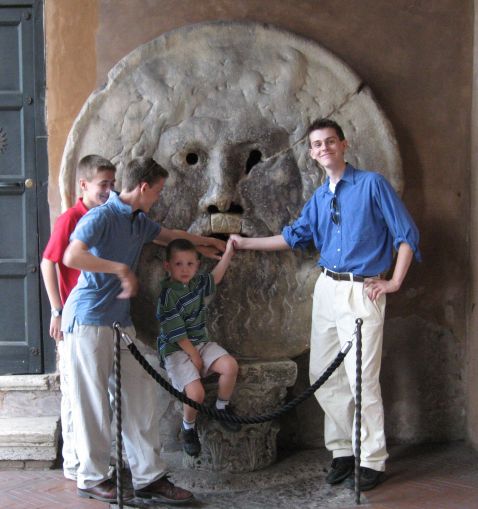 Three years ago, my older three boys tortured their little brother Nathanael at this very spot. You can see the look of glee on their faces, and the worry on Nathanael’s. Odd, because by that point the three of them had doubtless transgressed the boundaries of honesty many more times than had the youngest of the Check boys.

(Authors note: Readers may find my longer article on the convergence of Christian and pagan Rome of interest.)