The Five Circles of Evangelization

In my quarter century of Catholic evangelization efforts, I’ve been asked many questions. But one of the most common is:

“Do you have a system for evangelization I can follow?”

I can understand the intention behind this question. A lot of Catholics want to spread the Faith, but they don’t know where to start. So they want a program they can follow that will result in conversions.

Well, I have bad news and good news. First, the bad news: there is no guaranteed conversion-making system.

Evangelization isn’t marketing. A successful company might have a system that can turn the timidest person into the quarterly sales champion. But such a system doesn’t exist for evangelization. I should know; I tried to use a system when I was in college.

As a freshman—and before my conversion to Catholicism—I was a member of the Protestant group Campus Crusade for Christ (now called “Cru”). It taught an evangelization system with a script, a booklet to hand out, and detailed directions for how to share our faith with others. As someone committed to evangelization, I was excited to find this system and eager to try it out.

Fast forward just a few months: I now hated evangelization. It seemed so forced; so, well, scripted. Even when I was “successful,” which was rare, I essentially just got someone to say a prayer and then I never encountered him again. But usually I failed completely, and I felt bad for the people I was pestering. I soured on the whole idea of evangelization.

Fortunately, I came to realize that this wasn’t really evangelization; it was Christian cold-calling. When I later studied the history of the rise of Christianity, I found that the Faith didn’t primarily grow because of a specific system of evangelization but instead because of the Christian multitudes naturally sharing and living their faith with those around them.

And that’s the good news: there is a proven way to evangelize. It isn’t flashy, but it can work. It usually doesn’t produce instant results, but can produce lasting ones. I call it the Circles of Evangelization.

Essentially, everyone has a sphere of influence. These are the people you encounter every day: your family, your co-workers, your neighbors, your friends, your fellow parishioners. You don’t realize it, but you have a great impact on these people. This is the platform from which you can evangelize the world.

The Circles of Evangelization include five concentric circles, ranging from the most important to the least important. Each circle builds upon the next, so you can’t skip one of the first circles to reach a later circle. 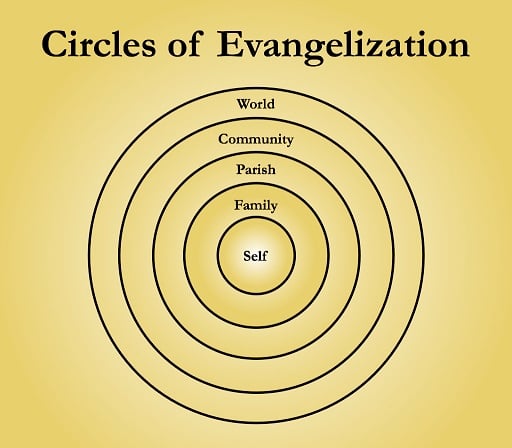 Everyone who’s ever been on an airplane knows the drill: if an emergency happens during the flight, first put on your own mask before putting your kid’s mask on him. This at first appears counterintuitive: your child’s life is much more important than your own. Yet if you don’t put your own mask on first, you could pass out and be unable to help your child. So you first focus on yourself, then you help others.

The same is true of evangelization. We must first evangelize ourselves. This doesn’t mean that all we need to do is live our faith and people will magically convert. Evangelization has to include sharing our faith. But if we don’t convert ourselves each day to Christ, we won’t be an effective evangelizer. Moreover, if we are truly and radically living our faith, we won’t need to find people to evangelize; they will come to us asking why we live the way we do.

Families are the school of holiness. It’s in families that vocations are born and saints made. In our efforts to evangelize, charity really does begin at home. If you are a parent, the bulk of your evangelization work must be directed at your children, starting at their births and not ending until death. Even if you are not a parent, you still can work at family evangelization. These are the people you are stuck with for life, for better or worse. Likewise, these are the primary people God put in your life to influence for him.

The next circle might appear counterintuitive at first; after all, don’t you attend your parish to grow in your own faith? That’s true, but the reality is that many at your parish are in desperate need of evangelization. They are also, in a way, “low-hanging fruit” of evangelization, for they already have an attachment to Catholicism—at least enough of an attachment to attend a parish.

One of the largest “religious” groups in America is former Catholics. At some point in their lives they were members of a parish, but, for one reason or another, they fell away from the practice of the Faith. How many would have stayed if a fellow parishioner had evangelized them? Many who still identify as Catholic receive the sacraments only irregularly. By emphasizing the importance of the sacraments to others in our parishes—particularly, by talking about how much they impact us—we can evangelize these somewhat-practicing Catholics.

Many people, particularly introverts, may feel like they don’t have a very large sphere of influence. But unless you’ve been living as a hermit for the past thirty years, it’s unlikely that’s true. Consider your past week: how many people did you encounter? You interacted with multiple people at work; you briefly talked to the young lady at the grocery checkout; you laughed with other parents at your son’s Little League game; and you said hello to your neighbor when you were pulling out of the driveway. In everyday life, we meet and interact with dozens of people each week.

So, how do we evangelize them? Consider Jesus’ encounter with the Samaritan woman at the well. She was coming to the well to draw water, and Christ used that simple activity as a springboard to talking about eternal truths. “If you knew the gift of God, and who it is that is saying to you, ‘Give me a drink,’ you would have asked him, and he would have given you living water” (John 4:10).

When many people think of evangelization, their first thought is of Christ’s command to his disciples in Matthew 28:19: “Go therefore and make disciples of all nations.” This conjures images of the great evangelists—St. Paul, St. Francis Xavier, Fulton Sheen—who preached and converted thousands. Such a task is intimidating and leads many Catholics to think they’re not called to evangelize.

But if you’ve read this far you know that evangelization isn’t primarily preaching to the multitudes. In fact, this is the final Circle of Evangelization because it is the least important for the individual Catholic. You likely won’t convert thousands, and probably aren’t called to do so, but you can help with the conversion of those around you.

Most people who are enthusiastic for evangelization want to jump into this fifth circle immediately. But without the foundation of the first four circles, work done in this circle will be for naught. I’m friends with a well-known Catholic evangelist whose work has impacted tens of thousands of people. But what I’m most impressed with about him is that all of his children have embraced the Catholic faith in their adult lives. This evangelist understood that if he ignored the work of the second circle, his work in this fifth would be meaningless. So before you want to jump on social media to defend the Church, be sure to keep your own house in order by evangelizing in the first four circles.

Evangelization isn’t easy. It involves one’s whole life and often doesn’t bring in noticeable results. Yet evangelization is a command from Our Lord, and so we all must make it part of our lifestyle. Following the Circles of Evangelization can help each one of us to be effective and faithful Catholic evangelists.