The Apocalypse Facing the People

The subject of which direction the priest should stand while celebrating Mass has generated a great deal of attention since about the middle of the twentieth century. The celebration of Mass “facing the people” (versus populum) was officially encouraged after Vatican II, but the historic practice, of “facing East” (ad orientem), is still permitted in the reformed Mass and normative for the traditional Latin Mass.

Even before the Second Vatican Council, some important historic churches, notably St. Peter’s in Rome, had altars at which celebration facing the people was possible. In St. Peter’s (and also in the Basilica of the Holy Cross in Jerusalem), this was because the high altar was over an important holy place, which needed to be accessible from the nave of the church, via steps. The solution to the design problem was to allow the priest to celebrate facing east, toward the rising sun, from the apse side of the altar. This general arrangement was imitated (or anticipated) in some other ancient churches. 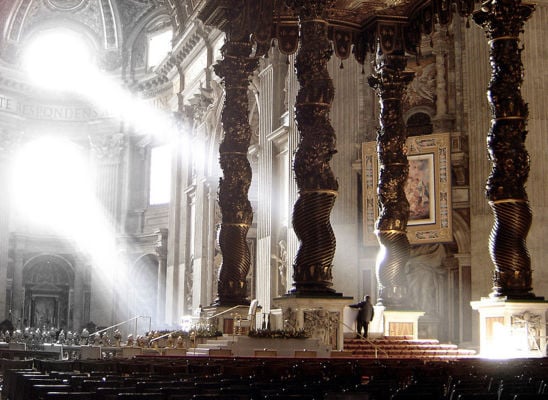 In modern times, the construction of free-standing altars was otherwise forbidden before Vatican II, since the tabernacle needed to be fixed to the altar, a principle upheld in 1957 (see the decree Sanctissimam Eucharistiam). The orientation of worship was not discussed in the documents of the Vatican II, but in 1964, the instruction Inter Oecumenici ruled that tabernacles should now in general not be fixed to new altars, and the construction of free-standing altars is regarded as preferable, a point reiterated in the General Instruction of the Roman Missal (§299). At the same time, the instructions for the priest celebrating the Mass still assume he is facing away from the people, telling him to turn around to face them at certain points.

In theory, the revised rules about altars only applied only to new ones, but a huge number of churches were “re-oriented” to allow celebration facing the people. The view was that people would benefit from being able to see the ceremonies more clearly. It was also thought at that time that this practice was dominant in the early Church, but the balance of archaeological evidence no longer supports this, as the scholar Fr. Michael Lang has shown. (See his 2004 book Turning Towards the Lord.) In the ancient world, people did not usually face each other over altars, or indeed across tables at meals—at meals, they reclined on one side, to allow food to be served from the other, and this is how the Last Supper is depicted in ancient mosaics. 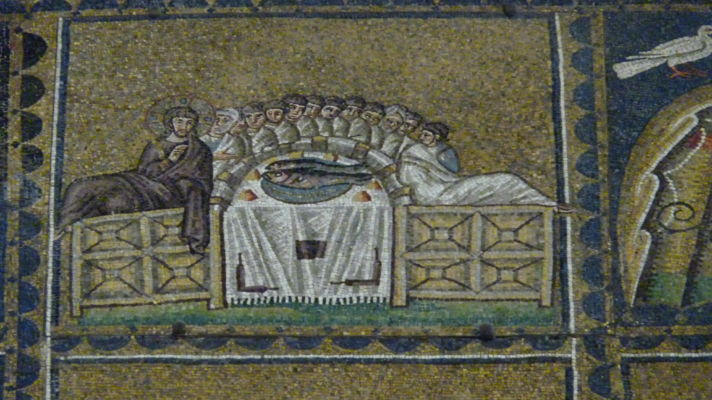 Why would anyone prefer Mass where the priest faces away from the congregation? The key consideration given by those arguing for this, who include prominent theologians such as Cdl. Joseph Ratzinger, before his election as Pope Benedict XVI, and Cdl. Christoph Schönborn, in a book he wrote in 1996, can be expressed as a question: to whom are the prayers of the Mass, particularly the Eucharistic Prayer, addressed? If they are addressed to God, then it makes sense for the celebrant to say them toward something symbolizing God, in union with the people. Historically, this has been the East: the direction of the rising sun.

The association of a particular direction, within a church, with God, is strengthened if that is where the crucifix and tabernacle are to be found, or, in ancient churches, a mosaic in the apse ceiling of Christ in glory. Even if the church is not in line with the geographical East, the direction of the altar from the nave can be regarded as symbolizing the East, and priest and people can direct their gaze, and their prayers, toward it, together.

Cdl. Ratzinger was particularly critical of a tendency he detected in celebrations “toward the people.” On the one hand, the people in practice can end up looking not at what the priest is praying toward, but at the priest himself, introducing what Ratzinger called “an unprecedented clericalization.” On the other hand, the priest can end up focusing his attention on the people. The new result is what Ratzinger called a “closed circle”: a group of people addressing each other, when they should be opened out toward God. (Quotations are from Ratzinger, Spirit of the Liturgy, 2000.) This is particularly emphasized when the seating in church is arranged in a circle around the altar. 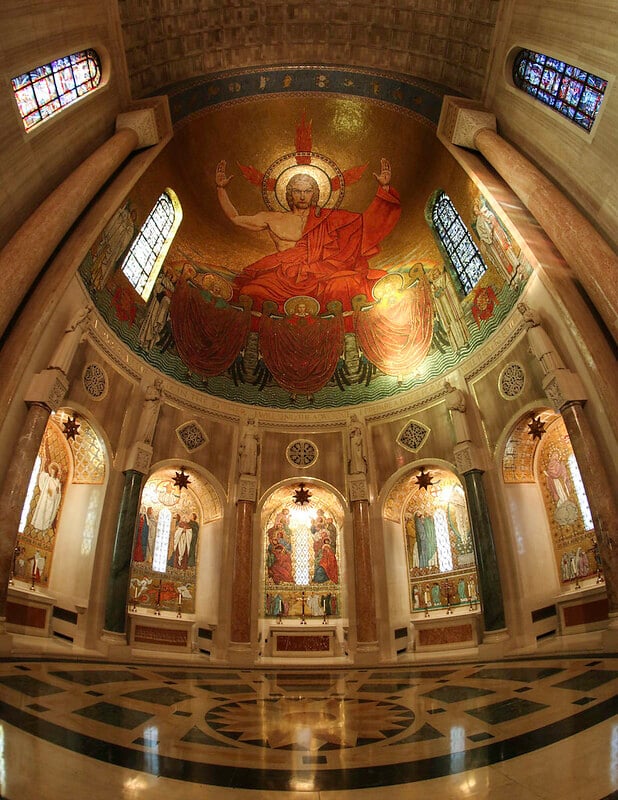 Christ in Majesty mosaic in the North Apse of the Basilica of the National Shrine of the Immaculate Conception, Washington, D.C. For more on this image, see Msgr. Charles Pope here. (Photo credit: Lawrence OP via Flickr, CC BY-NC-ND 2.0.)

The direction of prayer has had an enormous impact on the style of celebration. Priests celebrating toward the people can see if people are paying attention, like a public speaker or performer. If he is facing away from them, he has little idea of what is going on in the nave. Before Vatican II, this was regarded as a good thing: in the 1962 Mass, even when a priest is told to turn to face the people (for example, when he turns to them to say, “Dominus vobiscum”), he should keep his eyes lowered. He should not be distracted by the congregation from his work of prayer, and the congregation should not be distracted by him.

Where celebration versus populum is the norm, Catholics can get used to priests trying to engage them in what is going on with eye contact, emphasis in what they are saying, and even unscripted remarks. Experiencing Mass celebrated the other way can even be disconcerting. The point of it, however, is to allow the people to do what the priest should be doing: addressing their prayers to God. Above all in the Eucharistic Prayer, a celebrant facing East allows the people to follow what is going on in their own way, and to unite themselves spiritually to his prayer to God, which he leads from the altar.

Cardinal Schönborn adds another point (in his 1996 book, Loving the Church). One reason why it is the East that is the classical direction of liturgical prayer for Christians is Matthew 24:27: “For as lightning cometh out of the East, and appeareth even into the West: so shall the coming of the Son of man be.” This suggests the East as the place from which Christ will return, making eastward-facing prayer eschatological. The eschatological nature of the Mass, the way the Mass recalls and makes real for us not only past events such as the Last Supper and Calvary, but also the future return of our Lord and the consummation of world history, is something often emphasized in modern theological treatments of the liturgy. It is an irony that the way the priest faces in modern liturgical practice serves to obscure this point.

Celebration of Mass with priest and people facing the same way is the historically dominant practice of the West. It is also the practice of the Eastern churches. This makes it particularly unfortunate that a polemic has developed against it in the West. The Congregation for the Eastern Churches felt the need to counter this in its 1996 Instruction Il Padre, incomprensibile, in terms applicable in the West as well:

It is not a question, as is often claimed, of presiding the celebration with the back turned towards the people, but rather of guiding the people in pilgrimage toward the Kingdom, invoked in prayer until the return of the Lord.

Such practice . . . is thus of profound value and should be safeguarded.