In Catholicism, it is not left to each individual to figure out the meaning of the Bible on his own

Fr. James Martin recently raised a few eyebrows and brought the condemnation of some fellow clergy by seeming to question whether the Bible could actually be trusted on moral issues.

At first glance, Fr. Martin seems to be implying that the Bible’s supposed “sanction” of slavery means it’s not trustworthy as a moral authority, and therefore we don’t have to abide by its condemnation of homosexual behavior. 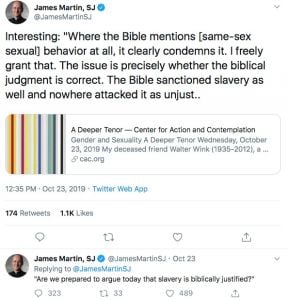 As it turns out, the full argument in the article to which Fr. Martin links takes a slightly different approach. It’s not so much about biblical authority, says Methodist minister Walter Wink, but biblical interpretation. He argues that although the Bible does teach that same-sex sexual behavior is wrong, we must not accept every biblical admonition as binding on us today. Rather, we must first interpret Scripture in light of Jesus and his love. As we interpret scriptural prohibitions of homosexuality through the lens of Jesus’s love, we will change our view about what is sinful and build a more inclusive Church.

This is obviously not the Catholic position. According to Catholic teaching, both enslaving people and engaging in same-sex behavior are sins and always have been. Jesus doesn’t approve of them and neither does Scripture or the Magisterium of the Church. This has never changed. Certainly, over the centuries individual Catholics have practiced and approved of both, but that does not change the fact that the Church as an institution has been a clear and consistent voice on these issues.

But Wink’s argument is logically consistent with the Protestant approach to the Bible and ethics. I know that many Protestants disagree with his conclusions about same-sex activity; however, within the Protestant framework of sola scriptura, they actually have no objective basis for doing so.

As everyone who has ever sat in a small-group Bible study knows, this leads to disagreements. Because there is no outside interpretive authority to which to appeal for guidance, these disagreements are often impossible to resolve. That is why, from the very beginning of the Reformation, Protestants broke up into splinter groups based on divergent reading of the same Bible.

That is not to say that Protestants haven’t tried to find some kind of outside interpretive authority in order to quell the disagreements and support a particular interpretation. They have appealed to reason, to the Holy Spirit, and, as is the case in Rev. Wink’s article, to one’s idea of what Jesus would think (as he puts it, “the Bible contains the principles of its own correction”). If everyone would only read according to (insert outside authoritative interpretive principle here), the argument goes, they would all get it right.

Inevitably, the practical outcome of this approach is that people see in the Bible what they want to see in the Bible and ignore or explain away what they don’t want to acknowledge. This is why the history of Protestantism is littered not only with interpretative chaos but moral chaos as well.

This leads us to the question of slavery. Here, Wink is right: for much of American history, millions of Protestants used the Bible to support slavery. They appealed to Genesis 9, Exodus 20, Philemon 12, Ephesians 6, and Romans 13, among other passages, to claim that it was God’s will for them to keep slaves.

Within Protestantism, there is simply no mechanism for settling that dispute. Pro-slavery biblical interpretation did not “lose out” because everyone agreed on a new interpretive principle, as Rev. Wink suggests. Indeed, many of the same racist biblical arguments that were used in the 1850s to support slavery were still being preached loudly and publicly from pulpits as recently as the 1970s in the fight to keep schools segregated. Rather, American moral sensibilities toward slavery changed, eventually taking with them the majority Protestant opinion.

Certainly, there were Catholic slaveholders and supporters of slavery. But the difference for them was the Church’s claim to authoritative moral teaching. It is not left to each individual to figure out the meaning of the Bible on his own. In the case of slavery, this meant that its Catholic supporters and practitioners were sinning, and the Church told them so, clearly and repeatedly.

For example, in 1435, at the very beginning of the age of exploration and colonization, Pope Eugenius IV issued Sicut Dudum, a papal bull demanding that Christians free all enslaved natives of the Canary Islands within fifteen days or be excommunicated. More than fifty years before Columbus set sail, the Church prohibited enslaving native peoples.

A series of papal pronouncements reiterating this position followed, as Steve Weidenkopf explains in an excellent article on this subject. As the African slave trade developed in the eighteenth and nineteenth centuries, subsequent popes condemned that as well.  Weidenkopf notes that “papal denunciations of slavery were so harsh and so frequent that the colonial Spanish instituted a law forbidding the publication of papal documents in the colonies without prior royal approval.”

Although the Bible’s teaching may have been ambiguous or subject to perverse interpretations, the Church spoke loud and clear.

The distinction between Catholic and Protestant approaches to Scripture and ethics is also evident in the sexual revolution. In contrast with the consistency of Catholic sexual morals, sola scriptura has been incapable of providing solid guidelines. In the same way it failed during the slavery debate, the idea that Scripture alone is enough to guide us has failed to stem the tide of sexual immorality. In fact, the approach has often encouraged evil to flourish by giving it God’s stamp of approval.

One of the clearest examples of Protestantism’s weakness in this area is the issue of contraception. Until the early twentieth century, all Protestants denominations in the world were in line with historical, orthodox Christian doctrine: they taught that contraception was immoral. However, at the Lambeth Conference in 1930, Anglican bishops decided to allow contraception, and the rest of Protestant Christianity soon followed.

Were they reading a new Bible? No, they simply reinterpreted the old one to line up with a new cultural standard.

As I document in my film Unprotected, giving in on the contraception issue was a very big deal. Especially after the release of the birth control pill in 1960, the widespread use of contraception led to increases in adultery, family breakdown, the objectification of women, divorce, abortion, and a host of other ills. Through it all, Protestants have, for the most part, continued to teach that contraception is morally sound and in some cases even a blessing from God.

They have also faltered regarding same-sex sexual behavior. In the same way that Protestants changed their beliefs to approve of contraception, they are currently in the process of adjusting their doctrine to keep in line with current cultural norms about the meaning of sex and marriage. Indeed, the trajectory seems to be following an almost identical path. This is because Protestantism’s approach to Scripture inevitably invites moral relativism and cultural decay.

In contrast, the Catholic Church never acquiesced to the cultural demand for approval of contraception. In 1968, at the height of the sexual revolution, Pope Paul VI issued Humanae Vitae to affirm its opposition. The Church has also remained steadfast in its opposition to abortion, divorce, and the other ethical issues associated with the sexual revolution, including homosexual activity.

It is able to do so because it possesses the authority to interpret Scripture’s lessons rightly—not according to a subjective feeling of the Spirit, or one’s opinion of what Jesus would think, or the moral fashions of the age.