Are You Ready for the Singularity?

If you’re over forty, picture life when you were a child: no cell phones, no email, no Alexa…and self-driving cars were on The Jetsons, not the nightly news. Even those who grew up this century have seen incredible changes in their lifetimes. (Just ten years ago the now-ubiquitous iPhone was introduced.) And not only has technology become more advanced—the pace of advancement is also rapidly increasing. In other words, the rate of technological growth isn’t linear, it’s exponential. Over time, the rate of change becomes almost a vertical line, as can be seen in this chart. 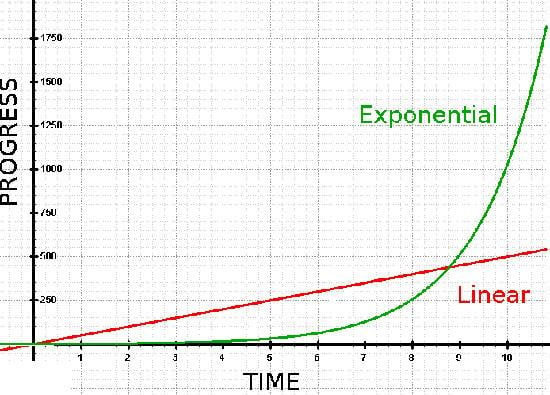 Some people in the tech community look at this rate of growth and posit that we will soon reach what is dubbed the Singularity: a moment when technological change has become so rapid that it is beyond our capacity to comprehend. (Imagine something as groundbreaking and culture-changing as the iPhone being introduced every day.) At that point, advances in artificial intelligence (AI) will result in technology—in the form of AI—building and advancing itself, creating a “super intelligence” far greater than human intelligence. That’s how powerful the Singularity will be.

Beyond the obvious fears of technology taking control and even destroying the world, there are religious concerns over the Singularity. Many in the tech community are atheist or agnostic, but some have been drawn to the idea of a super-intelligent AI as a god-like creation that will eventually rule us. Lest you think this is only the domain of kooks with fevered visions of Skynet dancing in their heads, former Google and Uber engineer Anthony Levandowski has already created a new religion in order to worship this yet-to-be-created AI super-intelligence.

Levandowski, one of the most knowledgeable people in the world when it comes to self-driving cars, which are a relatively advanced application of artificial intelligence, notes:

What is going to be created will effectively be a god. It’s not a god in the sense that it makes lightning or causes hurricanes. But if there is something a billion times smarter than the smartest human, what else are you going to call it?

So how does he think humans should treat this coming advanced intelligence? Simply put, we should worship it, for any other alternative will be disastrous for humankind. “Do you want to be a pet or livestock?” Levandowski asks. “We give pets medical attention, food, grooming, and entertainment. But an animal that’s biting you, attacking you, barking and being annoying? I don’t want to go there.”

Even many AI advocates who don’t embrace the religious views of Levandowski believe that AI will eventually surpass humankind. To them, the fact that AI will one day be far smarter than humans necessarily means AI will be superior to humans. The Singularity will put an end to outmoded ideas of humankind being the pinnacle of creation.

How should the Catholic respond to these developments? First, a few basics.

Catholics need not be afraid or distrustful of technology. Although not a Catholic, technology historian Melvin Kranzberg sums up the Catholic position well, “Technology is neither good nor bad; nor is it neutral.” In other words, technology isn’t in itself morally good or evil, but the use of it can definitely be good or evil. A knife can be used to cut carrots or cut someone’s throat. The internet can be used to improve one’s education or to surf for porn. So the Church doesn’t condemn the use of technology but rather encourages us to use it to serve God and neighbor and improve our lives in this world.

Artificial intelligence is a more complicated subject, for it touches on deeper philosophical topics such as, “What does it mean to be sentient?” We usually picture AI as human-like robots, but, although we might not realize it, crude forms of AI surround us every day: Apple’s Siri, Amazon’s Alexa; even Amazon and Netflix’s ability to know what you want next are all based on AI.

But intelligence alone is not what makes us human. (All animals have some level of intelligence.) A human is a composite of a body and a rational soul. That soul is made up of a mind and a will. Many confuse the mind with the physical brain, but the mind is far more: it informs the will so that a person can make free choices, which means he can act morally or immorally. This goes far beyond intelligence and touches on what separates man from beast.

One of the great promises of AI is that it can make choices without direct programming. “Dumb” programs simply follow a set of pre-programmed rules: if the user clicks this button, then do this, else do that. AI, on the other hand, makes decisions without being explicitly programmed for them. It takes in specific information that the original programmer could not have known and is still able to make a choice.

So does AI have—or can it have—a “will” as humans do? I would argue it cannot, for the will’s ability to make decisions is not the same as a computer program’s decision tree, no matter how advanced that tree might be. Ultimately, even advanced AI can only make decisions based on programming based on its original programming. On the other hand, a human person is free to make any choice he wishes, even terrible choices. This, fundamentally, separates us not just from the beasts, but from AI as well. Our “programming” by God is that we are not programmed—we decide how our life progresses.

And of course, however powerful AI may become there is no comparing it to God. It is common for people to think of God as simply a “super-human”—someone essentially like us, just way more powerful and smart. Yet God isn’t merely powerful, he is all-powerful. No matter how powerful AI becomes, it will never be able to create something out of nothing, as God did at the birth of the universe, and as he does in the creation of each new human soul. Further, God isn’t merely super-intelligent, he is the source of all intelligence. Our ability even to think of him comes from him. Although humankind (and AI itself) might be able to create something that mimics human behavior, only God can truly create a person, with a mind and a will to know and love him.

So Catholics can embrace advances in technology and even advances in AI. They have the potential to lift people out of poverty and improve the human condition. But we must be wary of the philosophical and religious connotations that are evolving around AI. Even though AI systems can be created that appear to have a “personality,” they can never attain the level of humans—let alone gods. In all of creation, nothing compares to the human person. As the Psalmist wrote,

When I look at thy heavens, the work of thy fingers,
the moon and the stars which thou hast established;

Yet thou hast made him little less than God,
and dost crown him with glory and honor.

Thou hast given him dominion over the works of thy hands;
thou hast put all things under his feet,

all sheep and oxen,
and also the beasts of the field,

the birds of the air, and the fish of the sea,
whatever passes along the paths of the sea.

And to the things man has been given dominion over, we can include all technology, including super-intelligent artificial intelligence brought about by the Singularity.