In light of the Vanity Fair cover story about Bruce Jenner’s decision to undergo a “gender transition” and current desire to be called Caitlyn Jenner, I thought it would be appropriate to look at five important questions those who support gender-transitioning need to answer.

1. What determines reality: facts or feelings?

My wife used to work at a psychiatric hospital where it was standard procedure to not feed into a patient’s delusions. If a patient, for example, said he was a cat, that would not justify leaving a bowl of milk for him in his room. However, if a patient with a male genetic code and male genitalia said he was a woman, then the staff had to treat him as a woman and refer to him with female pronouns.

But what’s the difference between someone redefining his species and redefining his sex? After all, both of these things are determined anatomically and genetically. Or consider this non-hypothetical example: what if a person thinks she is disabled but is actually healthy? Should we treat her mistaken sense of identity, or should we disable her so her body conforms to her mistaken self-identity?

The woman pictured below is named Chloe Jennings-White, and she is “transable.” This means that, although her legs function properly, she still uses leg braces and a wheelchair, because she identifies as “disabled.” Living as an able-bodied person is as painful for her as it is for a transgender person to live in accordance with his biological sex. Some “transabled” people even ask doctors to help them become disabled (such as by having their spinal cords severed). 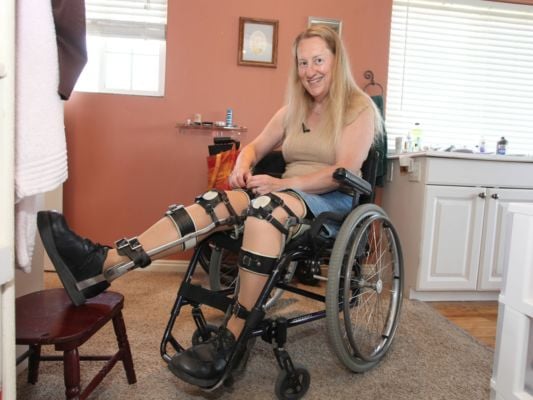 But how is allowing a person to identify as transable any different from allowing him to identify as transgender? In fact, one researcher in Canada (who happens to be transgender but not transable) says the transgender community hasn’t supported the transabled community because the former doesn’t want its recent momentum in the court of public opinion to grind to a halt by being associated with what most people recognize to be a serious pathology.

If I were to say that a woman is someone who wears high heels and makeup, and has long, flowing hair and a curvy figure, many people would accuse me of sexism. They would say I’m reducing what it means to be a woman to some superficial traits that aren’t representative of all women. After all, some women have short hair, and others can’t stand the aches and pains associated with high heels.

And yet, isn’t that what Jenner’s transformation into a woman is endorsing—the idea that a woman is a svelte and sultry individual who looks good (to some people) in a corset on a magazine cover? In fact, this is one reason that some feminists actually oppose gender reassignment and transgender identities.

So here’s my question to transgender advocates: “What do the terms man and woman actually mean?”

If the only difference is the terms themselves, then modern “gender ideology” is guilty of eviscerating the concepts of male and female of any objective meaning beyond “what I want to be called.” How can we ever hope to raise well-adjusted men and women who interact with one another in a healthy way (and so form the foundation of civilization) when no one has any idea what men and women are in the first place?

3. Is it hateful to be attracted to one sex but not to transgendered people who identify as that sex?

probably the most hurtful myth of all. It tells us that transgender people are somehow less human because of their gender identification. It is proof that they do not have a place in proper society. It is hateful and unacceptable. Everyone should have the right to be men and women, regardless of sex category or anything else.

This often happens in the realm of dating and interaction with the non-transgendered. For example, a transgender man (i.e., a biological woman who dresses like a man or has undergone surgery to try to resemble a man) may not be attractive to biological women, since they usually desire biological men, not transgender men. He may become indignant when women say, “I only date actual men” or “real men.”

Many states already have laws that outlaw discrimination based on “gender identity,” which means that it is illegal for an employer to make distinctions between biological men/women and transgender men/women. Granted, the law has no authority to coerce private citizens to not make those same distinctions. However, the law can legitimize the culture’s ostracizing of those who believe there is a difference between biological sex and self-proclaimed gender.

Society may, for example, consider a woman who dates biological men exclusively rather than transgender men (or men who do the same with biological and transgender women) to be as bigoted as someone who refuses to date immigrants because he or she prefers “natural Americans.” Will it become, in the words of the above critic, “hateful and unacceptable” to decline a romantic gesture from a transgendered person because that person is not an “actual” man or a “real” woman that one would normally be attracted to?

4. Will parents be guilty of child abuse if they fail to “transition” their children who identify as transgender?

In the past few years, there have been several high-profile cases of parents who helped their children undergo sex-change reassignment surgery in order to accommodate their identification of being transgendered. One famous case in 2011 involved Thomas Lobel, an 11-year-old boy who identifies as a girl named Tammy. His adoptive lesbian parents claim that Thomas (pictured below between them) has said he was a girl ever since he was three years old, and they worried about suicide risks if they didn’t help him use hormone blockers to stave off puberty. 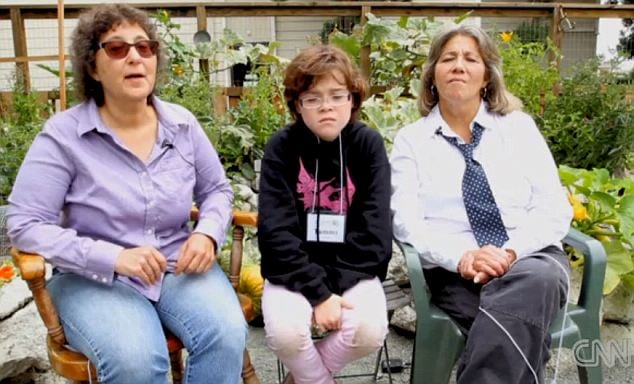 But what about the mental health risks involved in trying to change a child’s sex? According to John Hopkins University professor Paul McHugh, “When children who reported transgender feelings were tracked without medical or surgical treatment at both Vanderbilt University and London’s Portman Clinic, 70 to 80 percent of them spontaneously lost those feelings.” Imagine how devastating it would be for a little boy or girl to have his body permanently mutilated just because he or she expressed a fleeting, childish thought.

The other disturbing scenario we have to confront is this: Confronted with the claim that children with gender identity disorder are at greater risk for suicide and the assumption that a sex-change operation is the only way to prevent such a horrible outcome, will parents be convicted of child abuse if they don’t consent to a child’s sex-change therapy or operation? Imagine a child tells his teacher or counselor, even at the age of four or five, “I’m not a boy, I’m a girl; but Mommy says that’s not true.” Could this result in the child being taken from his parents’ custody for his own safety? In a culture that celebrates being transgendered, it’s not hard to see this coming to pass.

5. Will a culture that celebrates transgender identities tolerate evidence that such identities are harmful?

A 2011 study at the Karolinska Institute in Sweden produced the most illuminating results yet regarding the transgendered, evidence that should give advocates pause. The long-term study—up to 30 years—followed 324 people who had sex-reassignment surgery. The study revealed that beginning about 10 years after having the surgery, the transgendered began to experience increasing mental difficulties. Most shockingly, their suicide mortality rose almost 20-fold above the comparable nontransgender population. This disturbing result has as yet no explanation but probably reflects the growing sense of isolation reported by the aging transgendered after surgery. The high suicide rate certainly challenges the surgery prescription.

When presented with evidence like this, supporters of sex-change therapy usually say that negative health outcomes arise from “social stigmas” or “lack of resources for the transgendered.” But this is a classic example of “heads I win, tails you lose.”

We may even come to the point where testimonies of those who underwent sex-change operations and regretted their decision, such as the one shared on our new podcast, Catholic Answers Focus, will be seen as another cause of stigma and thus be declared anathema in the public square.

The bottom line is this: we should not mock or dehumanize people who have gender identity disorder. Someone struggling with this disorder requires counseling, appropriate medical intervention, and an empathetic ear that is willing to listen. But we also shouldn’t celebrate the mutilation of healthy bodies or facilitate the destruction of masculinity and femininity.

We should treat identity disorders equally and not refuse to call something a disorder just because many people disagree with that assessment (truth isn’t determined by majority vote, after all). Instead, we must compassionately help the person who has an identity disorder, regardless of his or her age or stage of life, come to know his or her true self and flourish as the person he or she was created to be.