Did St. Peter Steal His Chair from a Roman Sun Cult?

Today is the Feast of the Chair of St. Peter. In the early Church it was celebrated on January 18 and is associated with St. Peter’s stay in Rome, in memory of when the apostle first celebrated Mass there. Another tradition records the feast day to be celebrated on February 22, which is associated with his stay in Antioch. The Church used January 18 for the feast day until Pope St. John XXIII removed it from the calendar, and re-instituted the Feast of the Chair of St. Peter to be celebrated on February 22. The purpose of the feast is to celebrate the office of the papacy, and naturally, its connection to St. Peter, our first pope.

We use the phrase “chair of St. Peter” in many ways, usually to describe the infallible teaching office of the pope. But did you know there is an actual “chair of Peter”? No kidding, an actual, physical chair. 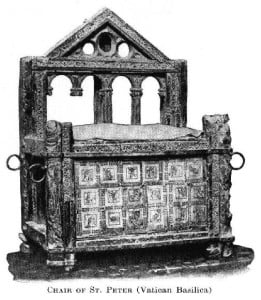 It’s an ancient wooden chair encased in a sculpture by Giovanni Lorenzo Bernini and located in the apse of St. Peter’s Basilica in Rome. The chair, a gift from Holy Roman Emperor Charles the Bald to Pope John VIII in 875, is conserved there as a relic. An old tradition says the chair once belonged to Peter himself, though scholars today say that’s unlikely.

Some anti-Catholic and atheist groups take an interest in this relic, claiming that it’s proof of a connection between Catholicism and the Roman Cult of Mithras because it has inscriptions on it that were popular in Mithraism. This seems, they claim, to indicate that the chair belonged to the Mithraic Pater (“Father”), who was the high priest in the cult.

Mithraism was actually dead and gone hundreds of years before the chair was made, and so it’s unlikely that the cult had any anything to do with it. The chair does, however, contain decorative inscriptions of several signs of the zodiac.

Should Catholics feel scandalized by this? No. The zodiac sign was hardly confined to pagan cults. In fact, it is a coordinate system based on the path of the sun on the celestial sphere that was widely used in the Roman Empire and beyond. Various cults throughout history have also made use of it, but this does not mean that it is always and everywhere a sign of occult influence.  Use of zodiac signs on “Peter’s chair” would not be surprising given the Church’s long history of interest in the science of astronomy.

There’s no evidence that the Church stole the chair from pagans. Any such claim is poorly argued and poorly supported. And whether or not Peter himself actually sat on the chair should be less of a concern to us than what the “Chair of Peter” means to the Magisterium. For more on that, check out the Catholic Answers tract, and then read how to defend the “Chair of Peter” for yourself.