The Missing Pieces of the Epiphany

The approach of Epiphany would not be complete without the yearly appearance of social-media memes speculating about the appearance of wise women at the nativity scene, who instead of bearing gold, frankincense, and myrrh would have asked for directions, brought more practical gifts, cleaned the stable for the Holy Family, etc.​​ 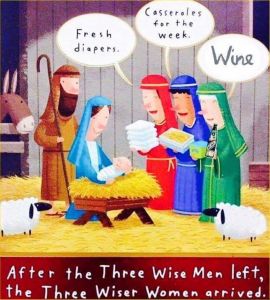 Although just a lighthearted joke, these memes do remind us that the infancy narratives of Christ don’t offer a complete narrative of the circumstances surrounding Christ’s birth. The evangelists chose to highlight events that were helpful for the audiences for whom they were writing:

The sacred authors wrote the four Gospels, selecting some things from the many which had been handed on by word of mouth or in writing, reducing some of them to a synthesis, explaining some things in view of the situation of their churches and preserving the form of proclamation but always in such fashion that they told us the honest truth about Jesus (Dei Verbum 19, emphasis added).

Let’s take the visit of the wise men as an example of a story where St. Matthew gives us the broad outline but leaves out a lot of little details.

Judging from the space he allots to their visit, the arrival of the wise men was far more important to Matthew than the details surrounding Christ’s birth. Unlike St. Luke, who talked about the search for a place to stay, the angels, and the shepherds, Matthew cuts straight to the visitors from the East:

Now when Jesus was born in Bethlehem of Judea in the days of Herod the king, behold, wise men from the East came to Jerusalem, saying, “Where is he who has been born king of the Jews? For we have seen his star in the East, and have come to worship him” (Matt. 2:1–2).

One of the strangest facets of the story of the wise men is that St. Joseph disappears at the start of the story. So far, Matthew had been telling his infancy narrative from Joseph’s point of view, but when the wise men arrive, he was nowhere to be seen—returning only after the wise men have left:

When they [the wise men] saw the star, they rejoiced exceedingly with great joy; and going into the house they saw the child with Mary his mother, and they fell down and worshiped him. . . . Now when they had departed, behold, an angel of the Lord appeared to Joseph in a dream (Matt. 2:10–13).

Even thinkers as pragmatic as Benedict XVI have tried to find deep theological meaning in Joseph’s absence. In his life of Christ, the pope emeritus wrote:

I have yet to find a completely convincing explanation. There are one or two passages in the Old Testament where particular significance is attached to the figure of the queen mother . . . . But this is probably not enough. No doubt [Joachim] Gnilka is correct when he suggests that this is Matthew’s way of reminding us of the virgin birth and marking Jesus out as the Son of God.

Or, perhaps, as the street-corner apologist, Frank Sheed pointed out, St. Joseph wasn’t there when the wise men arrived simply because he was out earning a living for his family. If the wise men showed up after the presentation at the temple, which seems likely since Joseph and Mary gave the offering of the poor and not a tithe of the gifts the wise men brought, then Joseph likely had to be working for the sake of survival.

Although we cannot discount the possibility of deeper theological meaning to Joseph’s absence in Matthew’s account, we can note that it also points to the historical authenticity of the Gospels. The evangelists wrote what they knew; they didn’t fill in details or create fanciful stories about Jesus’ childhood, as did some of the writers of the early Christian apocrypha.

The theme of Epiphany is the manifestation of the Messiah of Israel to the gentiles, which would have been hard for many Jews of the time to accept. The expected Messiah was supposed to deliver Israel from its non-Jewish enemies; it wasn’t anticipated that he would deliver the gentiles, as well as the Jews, from their common foe of sin and death. As the Catechism teaches:

The Epiphany is the manifestation of Jesus as Messiah of Israel, Son of God and Savior of the world. The great feast of Epiphany celebrates the adoration of Jesus by the wise men (magi) from the East, together with his baptism in the Jordan and the wedding feast at Cana in Galilee. In the magi, representatives of the neighboring pagan religions, the Gospel sees the first-fruits of the nations, who welcome the good news of salvation through the Incarnation. . . . The Epiphany shows that “the full number of the nations” now takes its “place in the family of the patriarchs,” and . . . is made “worthy of the heritage of Israel (528).

In a sense, the story of the Epiphany is a foreshadowing of Christ’s passion. Men from the East, representing all the peoples of the earth, arrive at a place where Christ is at his most vulnerable, watched over by his mother. They recognize him to be the fulfillment of the promise of the star they followed and worshiped him (Matt. 2:11). They gave him gifts that anticipated his burial.

What we tend to overlook, though, is that it wasn’t just the Holy Family that was rescued from Herod by the angel that appeared to Joseph. The wise men, too, were warned not to return to Herod precisely because their lives would have been in danger had they done so. If the Holy Innocents were the first martyrs for Christ, then the wise men were among the first of his disciples to find salvation.